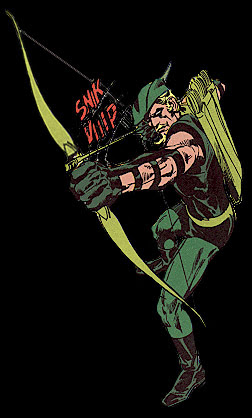 Whenever my girlfriend talks about going shopping, I ask her to look at the toys for me. Even if she's going to a fabric store, IKEA/HELL, or looking for fake purses in L.A. She'll tell me that they don't have toys there. I always think she's lying to me. Everybody's against me. If I ask you to get me toys, a monkey, comic books, or beer - you better try real hard to make it possible. I'm serious. You can make this happen. I don't joke about stuff like that. I have constantly asked everybody for a bow and arrow set. My conservative, secret branch-of-the-government father of mine only gave me presents that he was interested in. So, my older brother and I got bow and arrow sets when we were young. We had fun, actually. We had more fun when my father was inside the house because he would’ve beaten the crap out of us seeing us shooting arrows at each other's heads. So, I've always wanted to do that again. Not shoot an arrow at my brother's head. Been there. Done that. No. I want to stand out in my backyard with twenty-four arrows, a twelve pack of beer, andjust shoot a bunch of arrows at targets, bales of hay, and fat people. I dream of this. From you, I get smiles. This is not cool. Do I look like I'm being cute? I mean it. Nobody listens to me. I was talking about this to a co-worker the other day and he told me that his younger brother was an archer. Seriously. An ARCHER. Legolas in training. What? Wow. I did a double take. Yes, he was serious. So he gave me one of his younger brother's bows.

It needs to get re-strung. I don't care. When I first got it. I took it out with me. In my drunken glee, I thought that, maybe a bow-stringer would see me pretending to shoot things and would take pity on me. Nothing happened. I am not lucky. I write like Frankenstein tonight too, I guess. Errr.

So, the other day, I went looking for the local archery shop. We do have one. I swear. I didn't just imagine this. I saw the sign, said Ace Of Base. I did, really. I saw a sign...but couldn't find it this time. I felt like a nerd and eventually gave up. Yesterday I looked up the place in the phone book...

- Blah Blah Archery. How can I help you?

Yeah, Umm…Where are you guys located? I tried to find you the other day, but didn't see you.

- Well, we're not in out old location anymore.

Like I'm a regular. Got any new stuff? Dorkdorkdork.

Oh. You're not on Commonwealth?

Really? Okay. Well, are you by anything, like a landmark or something?

Yeah, I said LANDMARK. Like they were right by Mt. Vesuvius, The Death Star or the statue of Jebediah Springfield or something.

- We're between POO and BLARGH street.

Like I have a sense of direction and like I know the streets of the city that I live in. I don't. I'm fucking retarded.

Oh. Yeah, and do you string bows too?

Okay. I guess that's like asking a mechanic if they do car work, but - c'mon, man, like I'm supposed to know. Maybe they'd all start laughing at me or something. I'm just making sure, okay. When you assume…you make ass-meat out of U and ME. Something like that…

So. The moral of my story is that I'm drunk and that it's hard to be a nerd when the nerds...think you're a fucking nerd.

Watch. Now even the comic book guys will start pretending that they don't even know me.