A Cicada's Life For Me Every Twenty Four Hours...

Me - "I just had the weirdest dream. I dreamt that I was in an old apartment with some other people and that it was haunted. I saw things move around constantly and there were, like, doors opening all of the time by themselves and it was totally scary and awesome because we knew that what we were seeing was actually happening and it was because it was really haunted, like the things were all totally happening, like all of the time and shit, but then towards the end, Joel told us that he slipped us some drugs and told us that was why we were seeing what we were seeing but that it actually did happen because if I and everybody else saw something happen - no matter if it was because of what he slipped us - then it was true, because in a way, we experienced a reality that, no matter how it was, like..instigated or created - WAS real because it was a lived and...shared experience. So if we did think that the apartment was haunted and saw what we saw, then it was true....isn't that crazy?" 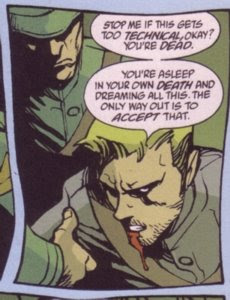 Than The Cookie Monster would drop-kick you in the weakest spot of your body.

Nobody should ever deny a being his addictive sustenance or his monstrous posturing and/or identity. What particular spot of your glorious body would a monster decide to feed upon? If you had one, maybe the only - but most likely one-of-many, vulnerable, atrophied or already weak parts of yourself -which part would your imaginary monster choose to feed upon?

Writing drunk and SLEEP.
Posted by Fat Free Milk at 1:13 AM 1 comment: