Stephen King Has Always Been My BFF... 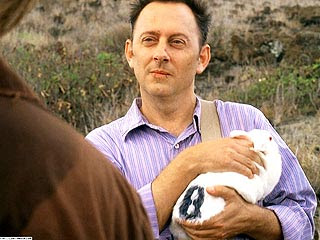 For years I dreamed of having the sort of massive oak slab that would dominate a room . . . In 1981, I got the one I wanted and placed it in the middle of a spacious, skylighted study in the rear of the house. For six years, I sat behind that desk either drunk or wrecked out of my mind . . .

A year or two after I sobered up, I got rid of that monstrosity and put in a living room suite where it had been. . . . In the early nineties, before they moved on to their own lives, my kids sometimes came up in the evening to watch a baseball game or a movie and eat pizza. . . . I got another desk -- it's handmade, beautiful, and half the size of the T. rex desk. I put it at the far west end of the office, in a corner under the eave. . . . I'm sitting under it now, a fifty-three-year-old man with bad eyes, a gimp leg, and no hangover. I'm doing what I know how to do, and as well as I know how to do it. I came through all the stuff I told you about . . . and now I'm going to tell you as much as I can about the job. . . .

It starts with this: put your desk in the corner, and every time you sit down there to write, remind yourself why it isn't in the middle of the room. Life isn't a support-system for art. It's the other way around.
Posted by Fat Free Milk at 3:48 AM 2 comments:

Kerouac? I loved you innocently... 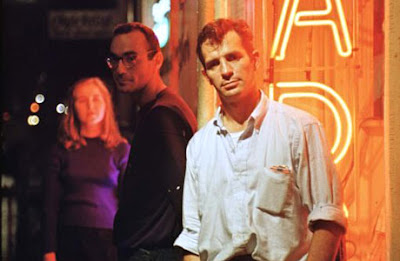 Remember above all things, Kid, that to write is not difficult, not painful, that it comes out of you with ease, that you can whip up a little tale in no time, that when you are sincere about it, that when you want to impress a truth, it is not difficult, not painful, but easy, graceful, full of smooth power, as if you were a writing machine with a store of literature that is boundless, enormous, endless, and rich.

Still, it's a bit comical to think of Kerouac going through such rah-rah exercises before getting down to the actual act of writing. At some points, it begins to sound like one of Al Franken's Stuart Smalley sketches from Saturday Night Live: "I'm good enough, I'm smart enough, and doggone it, people like me!"

In the years after he dropped out of Columbia, Kerouac was a merchant seaman, a brakeman on the Southern Pacific Railroad, a live-at-home dad, a runaway dad, and, through it all, a writer. As he dashed madly around the United States, hitching, driving, hopping on boxcars and into beds, and leaping up again to keep the toot going, he developed the writing method that mirrored his frenetic pace of life. In his "Essentials of Spontaneous Prose" (1957), Kerouac called on writers to "begin not from preconceived idea of what to say about image but from jewel center of interest in subject of image at moment of writing, and write outwards swimming in sea of language to peripheral release and exhaustion. . . . " Such verbal freedom, with its inherent lack of structure, was a mixed blessing. By exploring his acute sense of the American vernacular, Kerouac, like Walt Whitman and William Carlos Williams before him, loosened the collar of American prose. But by giving himself this latitude, he ensured that much of what came out of his typewriter and his pocket notebook was not real art. In the end, he would pay dearly for his attachment to this approach. From 1951 to 1956, Kerouac pounded out some 11 books of poetry and prose, all of which went unpublished.

But when his novel On the Road appeared at last in 1957, after years of haggling over changes with editor Malcolm Cowley, Kerouac became an overnight celebrity. Suddenly, everyone wanted a piece of the King of Beats. It is here that Jack Kerouac: Selected Letters 1957-1969 picks up. Kerouac was suddenly a one-man shopping stop for all things Beat. Travel articles, stories, jazz readings, plays -- you name it, and it was requisitioned from the eager author. Meanwhile, there was one party after the next, and Kerouac got progressively more inebriated at each event. A shy man, ordinarily generous and good-natured, Kerouac became combative when drunk, and he needed to be drunk in order to deal with his fame. Two years later, he wrote to his agent, Sterling Lord, almost asking for help: "I'm really now rapidly going to pot and on the verge of becoming a blob. . . . And what bothers me is the way I have to constantly drink to put up with nervous appointments . . . and vast nervous parties where everybody is staring at me and fulfilling their preconceptions of me as a drunken fool."

As fame used him, Kerouac tried frantically to use it, before the spell wore off. "I wanta get these masterpieces of mine published before everybody gets sick of me," he wrote to Lord during these heady years. And Lord responded valiantly, managing to place Kerouac's previously rejected manuscripts with domestic and foreign publishers everywhere. Kerouac published two books a year for several years, flooding the market with his work and raising the ire of critics who got the impression that he simply dashed off a book every few months. Some of their criticisms were indeed valid, but they were unnecessarily vicious. Kerouac's former mentor and champion, Kenneth Rexroth, began denouncing him in the New York Times Book Review, and Time magazine unleashed a persistent barrage of insults. One especially cruel critic wrote that "reading Mr. Kerouac's On the Road or The Subterraneans, I am reminded of nothing so much as an insistent and garrulous barroom drunk, drooling into your ear."

The more critics attacked him, the more unwilling Kerouac became to meet new people or see his old friends. He wrote to Gary Snyder of how disillusioned he had become: "I was in love with the world through blue purple curtains when I knew you and now I have to look at [the world] thru hard iron eyes." As his mother got older, Kerouac was forever cooking up schemes to bring all his family members together under one roof, and to keep away from the partying friends he had shared his life with. By the time of his death, he had cut himself off from all those former friends, becoming paranoid that he would be implicated in Allen Ginsberg's revolutionary politics. Instead, he stayed home and laid waste to himself with cases of liquor. "I only have one body and one soul and can't handle everything at the same time," he wrote in self-pity. Eventually, Kerouac got to the point where he couldn't handle anything at all, not even the thought of breaking the tape at the finish line. When held up to the bustling, bright, and wonderfully optimistic Kerouac of Atop an Underwood, these late letters tell a sad, cautionary tale.
Posted by Fat Free Milk at 3:29 AM 3 comments: 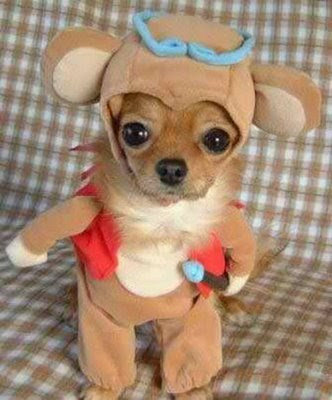 Me likes to eat good stuffs. Likes the good stuffs wet and the good big, heavy hands on my top. Me pees and am hapy and likes the patpatthumpthump and realeez like the wets slopeez good stuffz, slippee good food. Yum. I like itz.

My head iz tired alotz and I like the warm thing from the sky and fun and play.

I like tha big man with the sleep eyez and the beteer smellingz womanz whoz tall and pretty eyes with the sparkle thing in herz eyes too and the smile like dreamz things when I kick my legs when sleeping.

I like themz so much makes hapy deep in my belleez.

You love me feed food happyz me eyez

Luv yo alweezyowr puppeez
Posted by Fat Free Milk at 3:20 AM No comments: 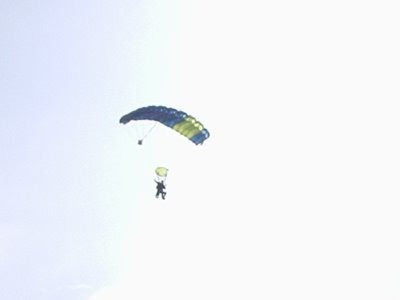 I Can Hear You Talking About Me...

there's nothing wrong with throwing yourself outside your house/heart
and not giving a fuck
you know where it comes from
but you know that Einstein's most famous formula had a lot of previous scribbled incarnations and that his crowning achievement equaled DESTRUCTION.

There's nothing wrong except what you'll make right.

I am Einstein's mind
and my mistakes
reverse in.
Posted by Fat Free Milk at 4:38 AM No comments: