I Want To Be As Famous As Pat Sajak But With Beautiful Hair Like Nuno From The Band, Extreme... 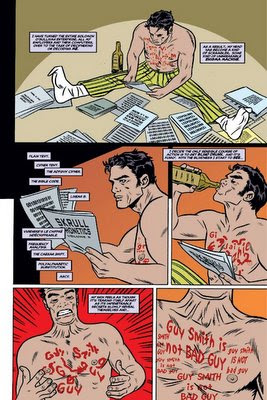 That is totally not true.

I DID once, have long hair - sadly, yes...almost exactly like his.

...Oh yeah, an hour ago I was offered to be an extra in a movie right down the street from my house through a friend. They said that they needed a tall, handsome guy to be in the background or to stand around shivering drinking hot chocolate that tastes like tepid donkey diarrhea or something like that. Thank you for pretending that I'm handsome. Thank you for thinking that I'm tall too, Brandon-Mr-Six-Foot-Two.

This, ladies and gentleman, makes me feel like a million dollars. Years and years ago, I would've dreamt for the opportunity to be "discovered" or to just even be around small productions, blargh, blargh, etc...I had pictures taken once. Which still get pulled out every now and then by drunken friends and screeched at HAHAHAHAHAHAHAHAHA!!!!!!!!!!!!! Gone to extra casting calls, etc.

Writing? Excellent. Virgins await me in heaven. Candy for everyone.

Just kidding. Fuck that. Of course I would still like to act. Hell yeah. I'm a complete idiot on stage, on camera and in front of a microphone. I'm every Easter ham ever ingested. I am Jack's lack of dignity. I am Jack's expired prescription of Ritalin.

But writing is easier - and you're just as much of a helpless whore by doing it.

This just means that I'm lazier.

And, by the way - I just got done emailing a friend back that works for a famous Talent/Lit agency in L.A. and that wants to help me out with submissions, etc.

BUT, still - if comic book companies would ever pick up the scripts and synopsis' that I've sent them - than I wouldn't need all of the kind bastards all across the universe to help me turn into a butterfly, now would I?

Now watch Brandon get a speaking role and then become as famous as Kevin Federline and then never speak to me again.

And then I'll be a fat, baby endangering Brittney Spears.

Hey Fellow, you have a top-notch blog here!
If you have a moment, please have a look at my banking vacancies site.
Good luck!