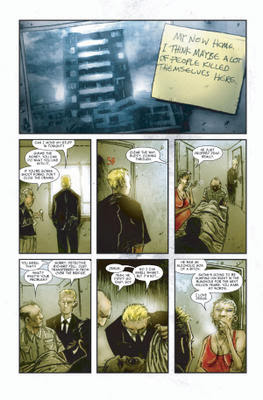 even though i love alec empire - when he talks all of his revolutionary/german political stuff - I'm at a loss. He's just too vague. But he rocks. Kind of like Elvis Presley and Hitler beating the shit out of each other while one sings and the other yells at the top of his lungs.

this is the first time that I've worn a sweater in a long, long time. I'm happy about this, but I should feel a lot cooler than I feel right now, because i feel like a dork. I wanted to wear something dark, scary, fashionably wrong or just plain boring - but sitting here looking like I do - just makes me feel like I'm an older boy writing a bunch of shit on a computer while the girlfriend gets ready. But I do have my fingernails painted - so maybe I'm not that old - just kind of retarded.

man, i love those nights when nothing's really happening and then you return the phone calls of a couple of friends (something that I'm trying to do w/ more regularity) and then it just turns into a whole shashed bang job of getting straight-pissed and then you wake up all head-thudded and w/ a friend on the couch asleep and then you take him home and remember that you have pictures of him putting his balls into Michelle's really expensive, fancy heels in your camera. this was w/ her permission, of course.

my girlfriend is taking TWO hours to get ready and by the time that we arrive at the bar - it will be late. I'll have four drinks combined w/ the million that I'm having right now, and then when the bar closes and she's ready to pass out due to her two total drinks - I'll want to keep on going. This will cause some drunken strife. She'll also be up at 8 in the morning and I will be squealing like a freshly-shucked newborn from the vagina of a sweaty mother. I will regret that last sentence tomorrow morning when I re-remember it.

i like dean martin. much. not as much as drinking, but much. those last two words sounded like I was saying BUTT MUNCH. If you had a BUTT MUNCH for LUNCH then it would be a BUTT MUNCH LUNCH.

I need to stop this before Blogger eats it, and I do too.

for me. just don't beat anybody up.